"Brasil - but there are no railways there" is a common reflection which one hears occasionally when reporting on a study tour to the railways of the largest country of Latin America. This opinion is right as far as that - in contrast to European habits - it is not possible to use the railways on long distances from town to town and from country to country. At present, only three exceptions confirm this rule. In spite of this there is a railway network with an extension of close to 30'000 kilometres which even is being extended. The private operators have after the concessioning and reparting of the state railway RFFSA during the 90s of the last century started full swing on the new task, carried out investment programs, modernisations and productivity increases and were thus able to increase goods transport considerably. In the Modal Split (i.e. the distribution of the transported goods tonnage) the railways captured a share of 25 pct., a value which is the envy of many an European railway manager. President Lula da Silva, recently re-elected for a further four year period, faces an almost titanic task to solve the logistic problems of the country, as the production potential both of agriculture and industry is larger than the transport capacity of all the transport operators. This threatens to brake the commercial upswing considerably.

Passenger transport on rails in Brasil is restricted to a few "islands". Some large cities have more or less intensive suburban traffic - the spectrum goes from a three car train and a diesel engine of veteran age to effective suburban train networks with in part most modern electrical multiple unit sets. In addition there are touristic rail lines which operate on beautiful and worth to visit sections of lines. Here also the steam engines come into their own which in Brasil in a friendly fashion are called "Maria Fumaça" - thus "smoking Maria", who knows why. The Association of rail fans ABPF (Associação Brasileira de Preservação Ferroviária) engages itself in hard volunteer work for the maintenance of witnesses of rail history and also in the operation of historical trains. Fortunately, we were able to win the ABPF as partners for the organisation of this study tour. The last "Interurban" in South America to Campos de Jordão provides the topping on this extensive railway medley.

Whilst on the first FLB study trip to Brasil in 2003 the north east of the country was the main target, we will now visit the four most southerly federal states. Here the activity is more concentrated, and there are no more long journeys to be undertaken to reach the next program point. One of the high points of technology history is certainly a visit to the inclined cable lines between São Paulo and Santos, which we shall visit extensively and ride on in a special fashion. 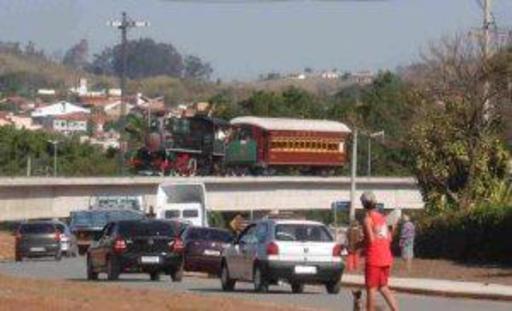 Friday, 02.11.07
In the evening flight from Europe with the Brasilian airline TAM to São Paulo.

Saturday, 03.11.07
Early in the morning arrival in São Paulo. After recovering at the hotel city tour with visit of the "Memorial do Imigrante", Trip with the steam train and the "Bonde" (tram) at the Memorial. Night at São Paulo.

Sunday, 04.11.07
Trip with the suburban train of the CPTM to Rio Grande da Serra and then by bus to Paranapiacaba. Visit of the railway installations (also the former incline lines) and the Railway Museum with steam train. If possible trip on the rack line to Piassaguera or by bus. Continuing to Santos. After arrival trip with the historical Bonde which also passes the former railway station of the São Paulo Railway. Night at Santos.

Monday, 05.11.07
In the morning trip with the funicular up to Monte Serrat at Santos, then continue by bus to the state power station Itatinga east of Santos. Special trip with the local, not public works line/tram. In the evening return to São Paulo and passing the night there.

Tuesday, 06.11.07
Visit of the CCO (control centre) of Metrô São Paulo. Trips on the Metrô and the CPTM/Companhia Paulista de Trens Metropolitanos (suburban rail system). In the afternoon visit to the Alstom factory (formerly Mafersa) and the engine shed of the goods line MRS Logística, both close together in the urban area of São Paulo. Night at São Paulo.

Wednesday, 07.11.07
Transport to the airport and short local flight by TAM to Curitiba. After arrival trip on the special Urban bus system, which operates on reserved lanes and has stops with high platforms. Night at Curitiba.

Thursday, 08.11.07
Journey with the "Serra Verde-Express" over the beautiful and spectacular "Rock Railway" from Curitiba to Morretes.
Continuing the journey with a Litorina (diesel rail coach) built by MAN in 1938 on the line operated by ABPF Santa Catarina to the harbour town of Antonina. In the afternoon return trip by Litorina to Morretes and return by bus to Curitiba (80 km). Night at Curitiba.

Saturday, 10.11.07
Trip by steam train of ABPF Santa Catarin from Rio Negrinho through the Serra do Mar to Rio Natal and back. The train operates on a beautiful and varied line with 4 tunnels and several bridges and cuttings. Night at Rio Negrinho 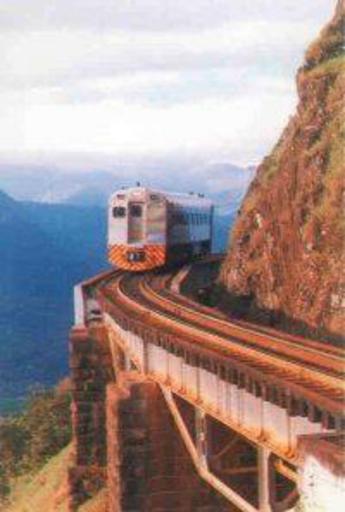 Monday, 12.11.07
Visit to the net of the FTC (Ferrovia Tereza Cristina). This system not connected to the remaining rail network, with a length of 164 kilometres, has been able to double the transport goods tonnage since privatisation ten years ago. The FTC transports black coal from the mines to the power station near Tubarão as well as containers to the port of Imbituba. We observe goods trains, possibly depot visit. Night at Tubarão.

Tuesday, 13.11.07
Bus trip from Tubarão via the worth to visit "Rota do Sol" to Bento Gonçalves in the southernmost federal state of Rio Grande do Sul (329 km. Night at Bento Gonçalves.

Wednesday, 14.11.07
This is an area of wine cultivation, and therefore the steam train is called "Trem do Vinho". We travel from Bento Gonçalves to Carlos Barbosa and back, and thereafter continue by bus to Porto Alegre (128 km). Night at Porto Alegre.

Thursday, 15.11.07
Rides on the suburban railway "Trensurb" at Porto Alegre and visit to the railway museum at São Leopoldo. In the afternoon visit of the experimental line of the "Aeromóvel" and possibly trip on this up to now unique and extraordinary means of transport. Night at Porto Alegre.

Saturday, 17.11.07
Transport from the hotel to Piratuba railway station. Hereby we cross the Rio Uruguaí on an impressive bridge which forms the frontier between the federal states of Rio Grande do Sul and Santa Catarina. Trip with a further steam train operated by ABPF Santa Catarina, the "Trem das Termas". The trip goes first from Piratuba along the Rio do Peixe and then via the above mentioned combined bridge over the Rio Uruguaí to Marcelino Ramos, and then back to the town of Uruguaí. Via Marcelino Ramos we reach again Piratuba. Night at Marcelino Ramos.

Sunday, 18.11.07
Bus trip along the Contestado railway line to Porto União de Vitória. For this line the FLB has on order from the government of Santa Catarina submitted proposals for its continued use and recommended not to dismantle the line. The track has been maintained and been moderately repaired. Night at Porto União de Vitória.

Monday, 19.11.07
Bus trip from Porto União to Ourinhos (500 km). Ourinhos is situated at the meter gauge line of the former Estrada de Ferro Sorocabana from São Paulo to Presidente Epitácio. Today the line is part of the ALL group of firms and continues to operate goods trains. Night at Ourinhos.

Tuesday, 20.11.07
If possible visit to the railway installations at Ourinhos. Continue by bus to Jundiaí. Visit to the railway museum at the former main workshop of the Ferrovia Paulista (Fepasa). Exceptionally, we can visit also the part of the workshops normally not open to the public. Night at Jundiaí.

Wednesday, 21.11.07
Short bus trip from Jundiaí to Campinas. Visit to the (broad gauge) railway station at Campinas. Special trip with the steam train of the ABPF São Paulo on their best known section from Campinas (Anhumas station) to Jaguariúna and back. During the trip visit to the workshop and vehicle collection at Carlos Gomes. Lunch "Churrasco" on the railway yard. At Jaguariúna trains can thanks to a bridge newly built by the city at the town centre reach again the old railway station. In the evening if possible extra trip on the historical tram "Bonde do Parque Portugal" at Campinas. Night at Campinas.

Saturday, 24.11.07
If requested further trips at Campos de Jordão or free time at the health resort. In the afternoon transport to the airport São Paulo/Guarulhos and at 19.10 hours departure by TAM to Europe.