The Funicular up Monserrate in Bogotá/Colombia

Bogotá has with the nearby mountain Monserrate a first class tourist attraction. From the mountain visitors have not only a splendid view of the city, they also find a well visited pilgrimage church.

To develop the mountain, a funicular was built in 1929. It is a typical Swiss line with two cars and Abt's points at the halfway passing loop. Named after its inventor, the points have no moving parts. The outer wheels have a double flange, forming a groove, the inner wheels are cylindrical and flat. The construction of the wheels results in that each car is drawn to the correct side. Following Swiss habit, car 1 operates on the left side and car 2 on the right side, looking upwards. Below are some photographs from the beginnings found in the Swiss periodical "Schweizer Bauzeitung" of 1933: 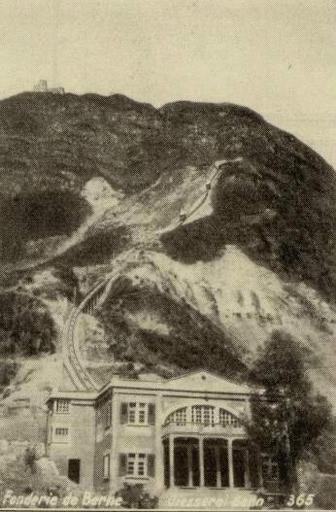 Lower station and line with passing loop and two cars. As yet there is little vegetation. Monserrate, Colombia.
(Source: Foundry Bern) 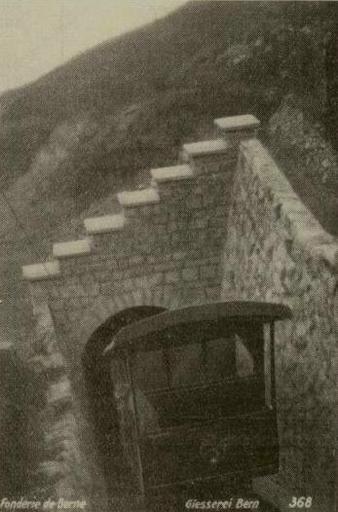 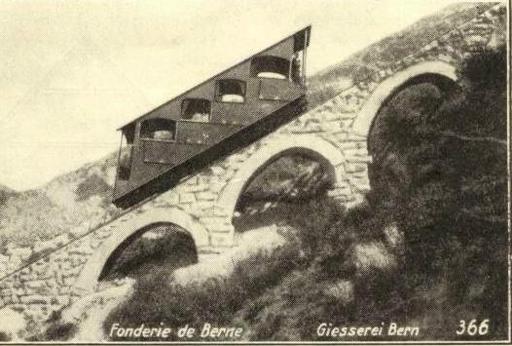 Construction of the tunnel seen from above. Monserrate, Colombia.
(Source: Foundry Bern)

Technical data of the line when built:

The line has two bridges of 3,8 Meter and 50 Meter as well as seven apertures of 4,7 Meter each. The length of the passing loop is 100 Meters, the radius of the points 200 Meter. The largest radius of the line is 300 Meter. In addition there is a tunnel of 252 Meter with a clear width of 4,2 Meter and a clear height above rail of 4,55 Meter. The track gauge is 1 Meter and there is no super elevation in the curves, and the rails are fixed on a concrete base. On the left of the track looking upwards there are steps. The rails have a special wedge head profile from the Foundry Bern of the Von Roll Iron Works which permits the use of the habitual safety brake (calliper brake) operated by applying brake callipers on the side of the rail head. By using the rapid application device, the stopping distance is reduced considerably. A photograph of the brake on a car from 3rd/uppermost section of the Swiss Stanserhorn Bahn (now converted to an aerial cableway, except 1st/lowest section), and two drawings of the brake can be found below. 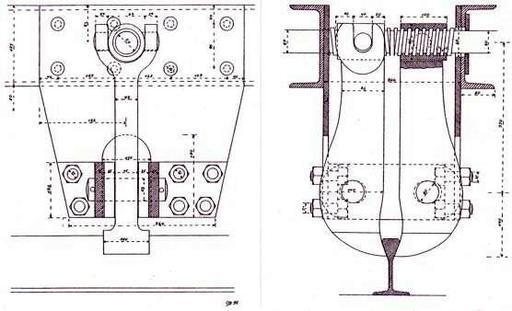 The ties are angle ties. The cable guiding rolls are made of cast iron. In addition, there is a spindle hand brake to secure the car when standing still.

The original cars had a length of 9 Meter and a wheel base (2 axles) of 5 Meter. Capacity in 4 compartments was 40 sitting and 20 standing passengers for a total capacity of 60 passengers. Empty weight was 7,2 tons, gross weight 11,4 tons.

The drive was a Ward-Leonard direct current motor of 750 Volt and 90 HP at 970 revolutions per minute. The maximum speed was 1,8 Meter/Second. The operation was manual from the upper station. The controller had 9 steps per operating direction, and final stopping was made by applying the hand brake. If this did not function, the safety brake would stop he car. The emergency stop could also be activated from the car by a foot pedal. The electrical equipment was manufactured by Brown, Boveri & Cie. of Baden/Switzerland.

Current was provided by "Las Empresas Unidades de Electricidad S.A." in Bogotá. The substation was at the lower station and the current was delivered as rotating current of 6600 Volt at 60 periods.

The upper and lower station (see pictures above) where built in the style then usual.

Modernisation of the line

In 1955, a parallel aerial cableway, a so called To-and-From or Pendular system with two cabins, also manufactured by Von Roll, was installed which is hand operated. This line serves as a relief to the funicular. It operates from Monday to Saturday from 07.30 hours to 21 hours at an interval of 20 minutes.

In 1962 the funicular was modernised extensively by the same firm, now under the the name of ABB Asea Brown Boveri AG (today the firm of Garaventa AG at Gwatt near Thun/Switzerland has taken over this business), and under the guidance of the engineer Ernst Wetzel. A new Ward-Leonard direct current drive was installed. The motor has a performance of 150 HP at 970 revolutions per minute. Speed increased to 2,5 Meter per Second, the running time should thus have been reduced to 5,5 Minutes. At the same time, new cars were delivered. They have a length of 10,15 Meter and a wheel base (2 axles) of 5,948 Meter. The cars were built by Carosserie Gangloff AG of Bern. They have a capacity of 25 seated and 57 standing passengers, for a total capacity of 82 passengers. One of the old cars has been preserved. Also newly installed was automatic control from the operating desk at the top station, but the hand drive is still available. The emergency stop can be activated by a push button from the car. Steering and safety installations were delivered by the firm of Kündig AG. at Lucerne, Switzerland which however no longer produces these controls. The leading people of that firm founded a new firm, Sisag at Altdorf, Switzerland which continues to produce such and fully automatic controls.

The lower station of the funicular and the aerial cableway are at Carrera 2E, No. 21-48, telephone (0057)-284.57.00. Operator of the two lines today is the Compañía Teleférico Monserrate S.A. in Bogotá.

The local firm HL Ingenieros with head office at Bogotá has replaced the main cable and the contra cable of the aerial cableway in 1985 for a total sum of USD130'000. In 1991 the same firm has checked the electrical installations of the funicular and renewed the current supply and the supervision of the electrical system.

In 2003, new bodies for the funicular cars were introduced. As a novelty, they feature a glassed roof which can be recognised on the interior photo below. Also this time an old body was preserved in the open. Today, the speed is 3,2 Meter per Second, the running time is 5 minutes. Original car of 1929, out of service, to the right of the lower station of the funicular. Monserrate, Colombia.
(Photo: Tom Goetz) 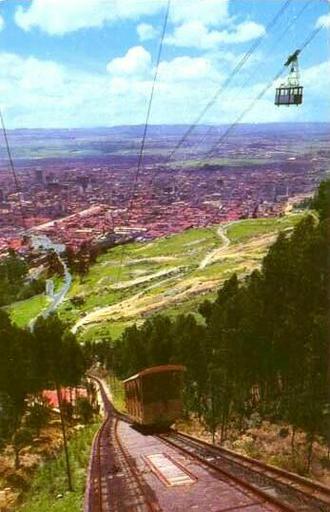 Interior of the car of 2003 with glassed roof. Monserrate, Colombia.
(Source: Via Libre)