From the history of the railways of Ecuador

The railways of Ecuador consisted of a total of three lines:

From the harbour city of Guayaquil originally a bridge should have been built across the bay to Durán, but this has not yet been realised. Therefore the goods were transferred by ferries to Durán where they were loaded into railway goods wagons. At Durán can be found workshops, and there the railway line to Quito starts. The first line, with a length of 447 Kilometres, the basic line, called south line, goes from Durán as a lowland section via Yaguachi and Milagro to Bucay where the main workshops can be found. There the mountain section starts with an inclination of up to 55‰, which leads via Huigra, Sibambe (start of the spectacular Devil's Nose section, called after a rock spur, one of the world's most beautiful alpine railway sections ), Alausi and Palmira to Riobamba (2753 Metre above sea level). From there, the line reaches the culmination point of the line, 3609 metre above sea level, and goes via Ambato and Latacunga to Quito (2817 metre above sea level).

A branch line with a length of 145 kilometre goes from Sibambe via Azogues to Cuenca. Construction started in 1915, and the line opened in 1965. There were many private sidings with tracks of 600 mm and 1067 mm gauge, among others to the sugar factory Ingeniero San Sarli and to the plantations of the Empresa de Carros Urbanos.

The third line, called North Line, with a length of 373 kilometre, goes from Quito via Ibarra, Primer Paso and Cachavi to San Lorenzo where the sea is reached, and was finished only in 1957. All these lines have cape gauge of 1067 mm.

In 1861 the government, following a request from the President Gabriel Garcia Moreno, decided to build a railway network. In 1873 the first section with a length of 91 kilometre from Durán via Yaguachi to Milagro started operation. Heavy disturbances and the outbreak of the Cotopaxi volcano in 1877 retarded the work. In 1884, Barraganeta and in 1888 Bucay was reached where the main workshops were installed. After the death of the President, 22 years later, with the triumph of the liberal revolution, in 1895 work was restarted by the General Eloy Alfaro Delgado. After the death of the general the liberal government of General Eloy Alfaro restarted the work at the beginning of the 20th century and delegated the analysis and the study of the new alignment to the North American engineer Sighald Muller. After a investigation of two years, the engineer called the project to be the most difficult railway line of the world because of the geographical impediments to be overcome.

After further studies it was decided to delegate the construction of the line connecting the coast and the highlands to the North American Archer Harman who employed both local as well as black workers which were supported by 4000 Jamaicans. The line crosses Chimborazo province where the river Chancán continuously undermined the line and its concrete base. The terrible climate, the snake bites and the fever caused by the mosquitos resulted in a non-stop flight of the workers. Finally, on the 25th June 1908 the line reached Chimbacalle station at Quito where on the last section of track a golden rail nail was driven into the sleeper by the daughter of the railway director, América Alfora.

Whilst in the lowland section the glut and marsh districts hindered the construction, the lack of drainage systems and the fixed roadbed resulted in numerous interruptions during the tropical storms. Ballast is rare, the tracks are fixed with wrought iron nails and without rail chairs on the roughly cut wooden sleepers. On the mountain section, earth slides provoked repetitive considerable damage whilst the cause of this was never remedied. The quick sand and the volcano ash on the mountain line resulted in severe difficulties for the operation. The alignment was never changed after 1908 and only maintained minimally. The alignment around the Devil's Nose is being disputed even today. By using two setting-back track sections it was possible to overcome the large vertical height difference with normal inclinations as the railway is a pure adhesion railway.

At the opening of the lowland section there were originally 4 Baldwin steam engines of Type 2-6-0 (1'C) available. Then followed engines of type 2-8-0 (2'D) for the mountain section. In 1929 Beyer-Garratts engines arrived which could haul up to 150 tons. Between 1927 and 1953 the steam engines were supplemented by further Baldwin engines of type 2-8-0 (2'D) for the mountain section, of which the last engines were delivered by Baldwin-Lima-Hamilton. They were the last narrow gauge steam engines built by Baldwin, and the service numbers went as high as 58. Today, there are still 2 lowland section engines and 9 mountain section engines around of which 4 need a small repair job, 6 a large repair job and 1 has been dismantled.

In 1950 arrived 3 diesel electric engines called "Samatra" of which no details are available. They might be engines destined for Sumatra as Sumatra has the same track gauge. Of these engines 2 have to be completely rebuilt and 1 has been dismantled.

In 1957 arrived 5 Alsthom diesel electric engines Bo'Bo'Bo' with 3x2 Sulzer 6LDA25 motors of each 170 HP with the service numbers 151 - 155 for the Ibarra - San Lorenzo line. They had rheostatic brakes, in addition air brakes. For switching up the 12 steps, there was a pneumatic servo motor. Of these engines 1 has to be completely rebuilt, 4 were dismantled.

In 1968 arrived 10 diesel electric Alco CoCo-Loks of type RSD29/DL560C with 2600 HP and 16 cylinder 4-stroke turbocharged motors, serial numbers 491 - 500, service numbers 161 - 169, for the line from Durán to Quito, an order which Alco had passed on to its licence builder Euskalduna in Bilbao, in the Basque part of Spain. Of these 2 have to be completely rebuilt, and 8 were dismantled.

In 1992 arrived 10 more diesel electric engines GEC-Alsthom type AD24 Bo'Bo'Bo' with the service numbers 2401 - 2400, part of them a state gift of the former french President Mitterand. Of these, 4 are in working order, 2 need a small repair job and 3 need a large repair job.

Workshops were originally built at Durán and Bucay. Further workshops can be found in Riobamba (responsible for diesel equipped vehicles), Quito, Ibarra and San Lorenzo. In Riobamba there is also the railway's museum, the Guayaquil & Quito Railway Museum.

On the line to Cuenca which mostly served for goods transports, service stopped already in the early nineties. On the other lines there was regular goods and passenger operation until 1998. The then El Ninõ tempest disrupted the remaining lines, and from then on trains operated only on partial lines.

Between Bucay and Huigra there is 1 daily Autoferro. Between Riobamba, Sibambe and Alausi (Devil's Nose line) there is 3 times per week (Wednesday, Friday and Sunday) 1 train, between Quito and Cotopaxi for the visit to the nature protected area 1 train on Saturday and Sunday each. Between Ibarra and Primer Paso there is 1 daily Autoferro. Furthermore, Autoferros operate between San Lorenzo, Cachavi and Lita. Between Alto Tambo and Km 320 there are goods trains according to requirements. The old state railway ENFE - Ente Nacionál de Ferrocarril del Estado has been privatised, replaced by the new EFE - Empresa de Ferrocarriles Ecuatorianos, and very recently the railway was renamed Ferrocarriles del Ecuador. This has taken over 9 diesel engines and 9 steam engines. As there are no signals, radio systems, manned intermediate stations and working telephone lines, there is normally only 1 train underway (exception: Riobamba - Devil's Nose).

Since 2005 a project of the re-establishment of the lines is underway. Thanks to credits from Venezuela work has now started on the rebuilding of the line between Durán and Bucay where also concrete sleepers are used. Further projects concern a bridge between Guayaquil and Durán and a bypass line at Durán. 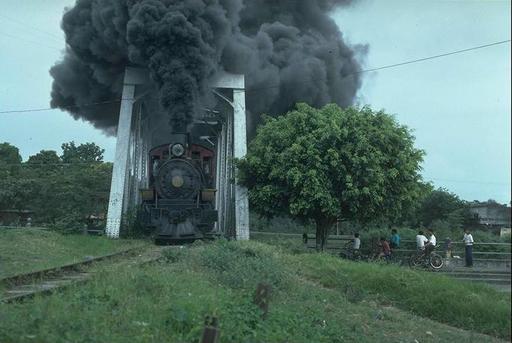 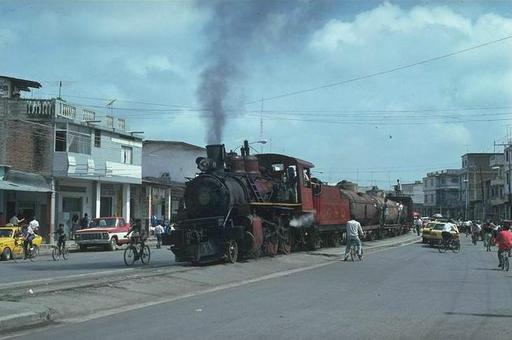 The Mixto with lowland engine 11 crosses the city of Milagro on the way from Yaguachi to Bucay, Ecuador.
(Photo: Patrick Rudin) Lowland engine 11 (2-6-0, Baldwin, 1900) has arrived with a Mixto at Bucay, where the mountain locomotive will take over the train, Ecuador.
(Photo: Patrick Rudin) 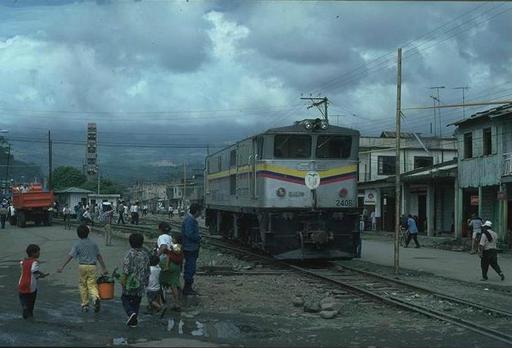 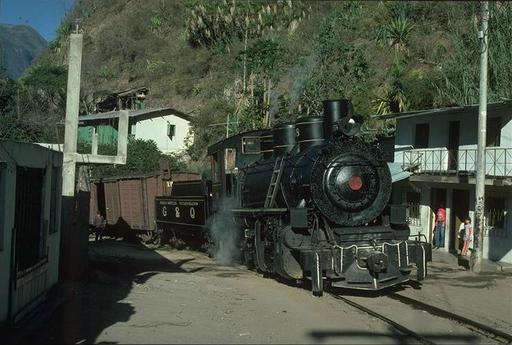 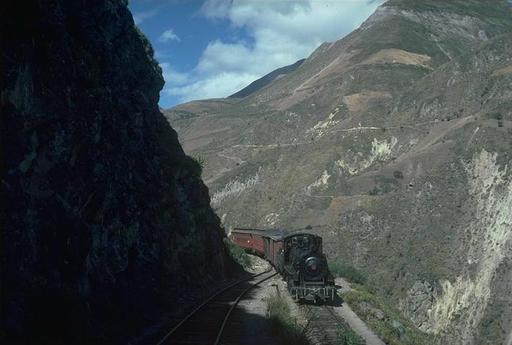 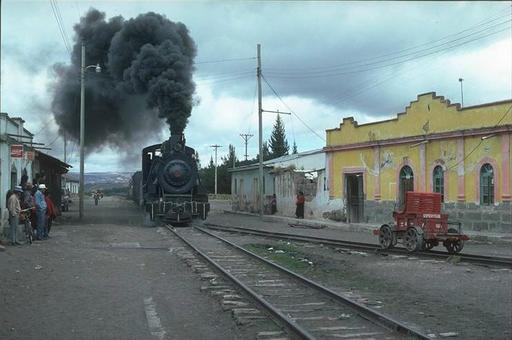 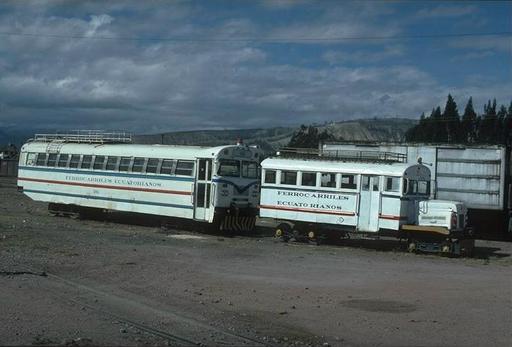 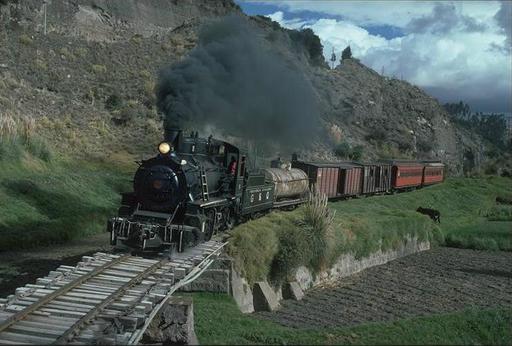 Special train with mountain engine 58 on the way from Riobamba to Ambato, Ecuador.
(Photo: Patrick Rudin) 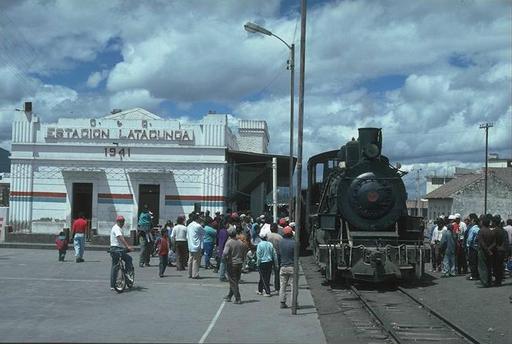 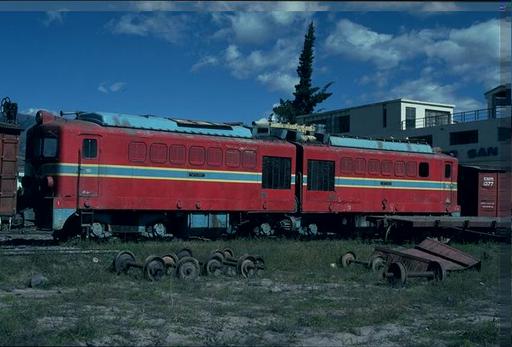 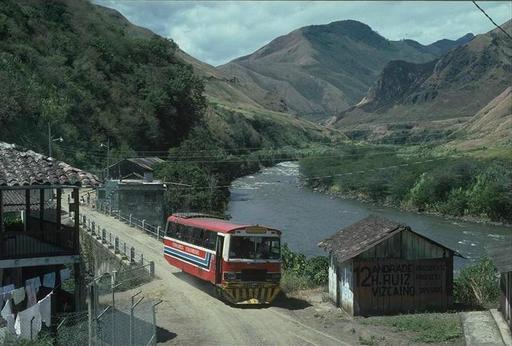 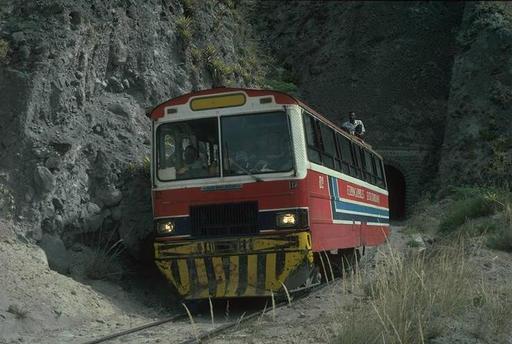 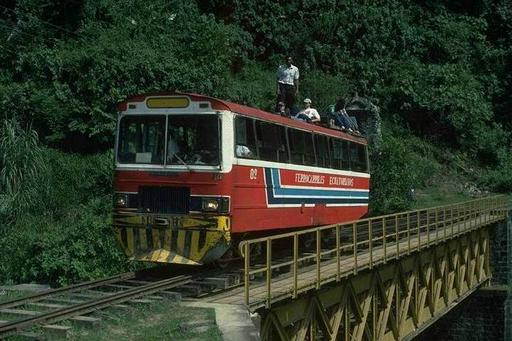 Autoferro on the line Ibarra - San Lorenzo between San Lorenzo and Cachavi on a bridge, Ecuador.
(Photo: Patrick Rudin)