Acapulco is built on rocks. Therefore there large numbers of funiculars which should rather be called inclines. For example, the Radisson hotel has such an incline which connects the various levels of the hotel. 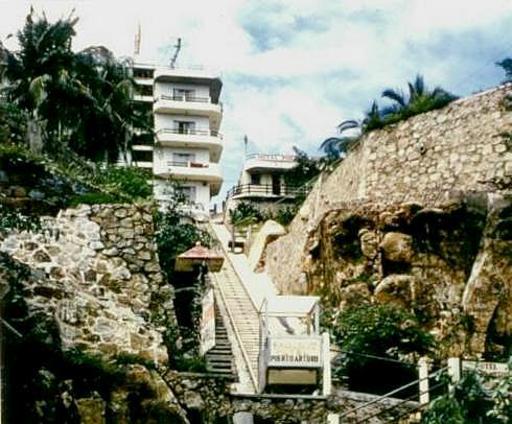 Holiday flat, can be rented. The non-plus-ultra, flat with your own funicular!

Not very much is known about this funicular. Dr. John A. Kirchner has made some photographs in 1978. Vila de García lies in the province of Nueva León, about 40 km from the province's capital, Monterrey. For many years the funicular transported visitors to the stalactite cave García up to the entrance high up along the mountain. In the meantime the line has been replaced by an aerial ropeway. Difference of altitude is 750 Meter. The central track both above and below the passing loop was common. Drive was electric. The cars were two-axled , with the outer wheel on each axle double-flanged forming a groove and the inner wheels flat and cylindrical (Abt system).